YOU ARE HERE:
ABOUT US
NEWS & UPDATES
DIAMOND COATING OF ANGA MECHANICAL SEALS
A A A 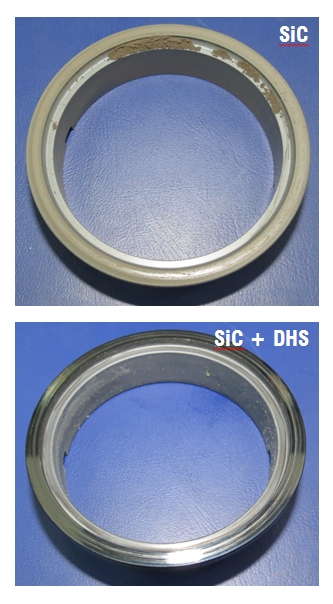 From the couple of years diamond coating has been more widely used in sealing technology. ANGA also has in his offer seals with diamond coated sliding rings, which are being used for improvement of working attributes of sliding faces and seals as the result. At the same time, the implementation of this technology enabled ANGA to face the sealing problems of customers, which has been difficult to deal with up to now because of material reasons. You also have to remember, that the analysis of pumps’ and seals’ manufacturers shows that over a half of seals’ failures is caused by dry running of sliding rings and the consequently one-fifth of pumps’ failures is caused by this problem. The application of diamond coating enables to reduce significantly the risk of such failures.

ANGA has decided for the diamond coating of British company DIAMOND HARD SURFACES. Among her offer ANGA has chosen the coating type Adamant® 010 with the thickness of 7 μm, which is suitable for elements demanding the great level of precision of surface finishing and which runs under high rotational speed (up to 40000 RPM) and medium loading conditions. The thickness of the coating can be varied, according to the demands of the application, between 1 and 10 μm. For best results in terms of reduced friction, the company DIAMOND HARD SURFACES recommends that both the moving and stationary parts should be coated. This is an amorphous diamond coating (not having a crystal structure), applied with the method of CVD (Eng. chemical vapour deposition).

This kind of diamond coating is characterized by: 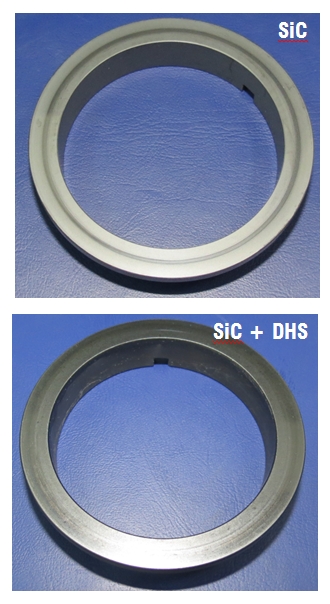 The above mentioned features enable to apply silicon carbide rings with diamond coating in mechanical seals of shafts operating in such equipment as pumps, compressors, blowers and mixers, where:

The examples of such applications can be mixers in pharmaceutical industry, where mechanical seals fixed on the shaft from the top, often run dry and the abrasion products cannot under any circumstances get to the mixed medium. Another field of application for such seals is petroleum industry, where we can find media with low boiling point, which often cause dry running of seal sliding faces.

Except above mentioned examples, seals with diamond coating sliding rings can be implemented also in other branches such as: chemical, waste water, power and heat engineering, in this application where periodic dry running or the risk of under-lubrication of seal sliding faces is existing.

Diamond coating on rings allows to improve stable operation time under the conditions of dry running, which naturally prolong the mean time between failures of seal and pump (MTBF), even in case of complicated applications.